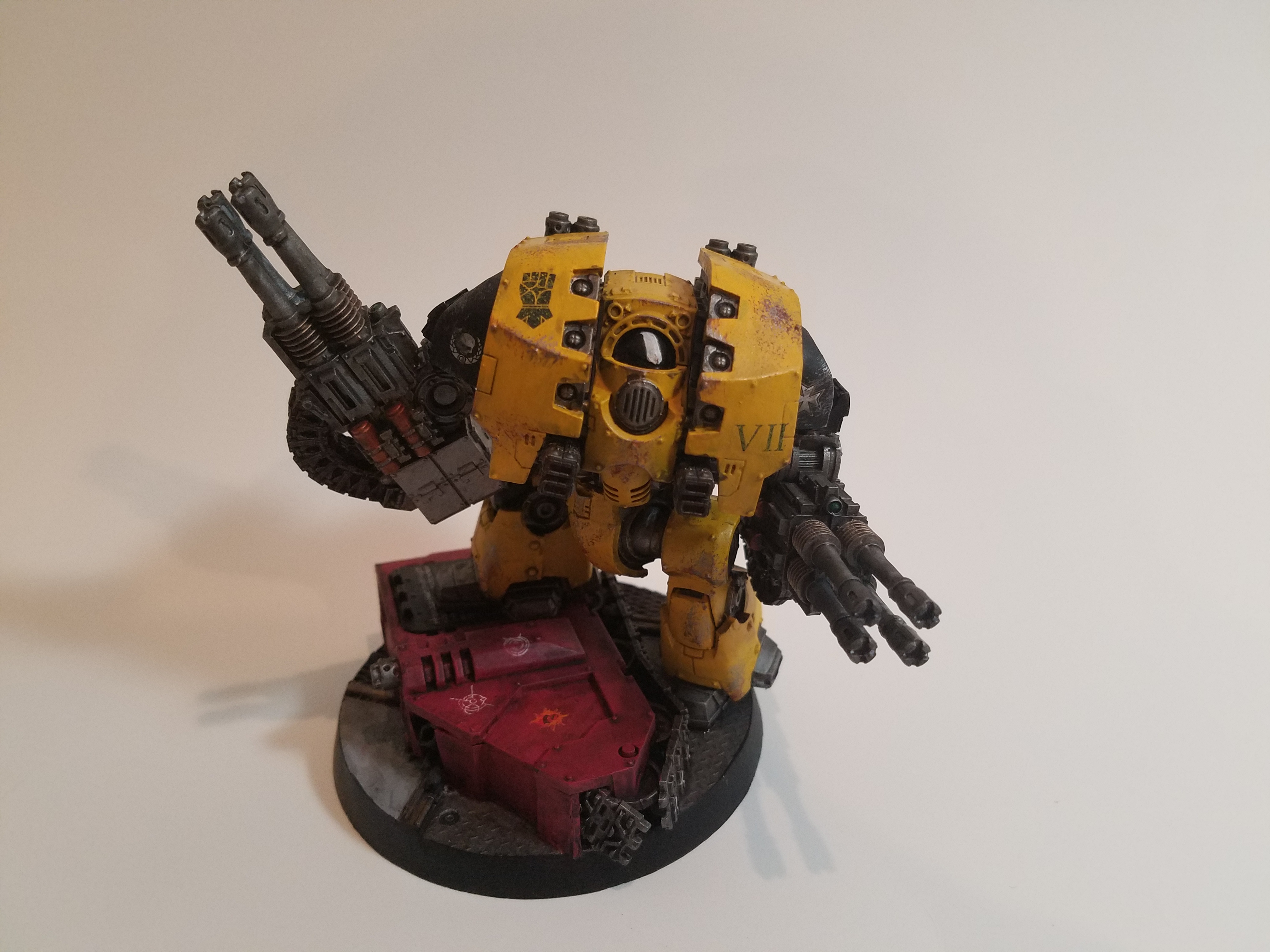 One of my hobby goals is to restart my blog (successfully this time, unlike my “restart” I promised in 2016) to help track what I’m doing for the 2018 ITC season.  Eighth edition has really been a shot in the arm for 40k.  I’ve enjoyed playing competitively for quite some time now, but one of the things that really held me back for a while in terms of effort and enthusiasm was the lack of a strong local player base to get games in regularly to practice.  Thankfully that is totally a thing of the past.  We have three regular 40k nights going in Omaha now, with Thursday and Friday nights being especially popular.

I continue to play Imperial Fists because they are also my Horus Heresy army and I have the ridiculous goal of trying to paint an entire chapter of Heresy marines (working on my 3rd of 10 companies right now!).  The upside of that goal is I have a *LOT* of different units I can slot in.  When I started to go about building my 8th ed list, I immediately centered on the Leviathan: This thing is a workhorse.  Hits on 2+s, Toughness 8, 2+ save, 4++ invulnerable save with 14 wounds.  It has two heavy flamers to deal with charges, and the stormcannon arrays are nasty.  TWENTY shots at S7, 2 damage a pop.  At 309 points it is only slightly more expensive than 2 rifledreads but it pumps out more shots from a tougher platform.

I went down with JT, another Outlander, to an LVO prep tournament in January to try my list out.  I ended up going 2-1, losing to a Chaos soup list and beating Dark Eldar and Sisters.  I learned some critical things:

I modified my list a little, and got some more practice games in.  After playing Hive Guard for the first time, I realized I also needed a way to deal with units that ignore LOS.  I settled on adding the Whilrwind Scorpius to my list: This past weekend, we had a pretty large 1 day event at the Omaha Game Shoppe.  It was supposed to have 24 players but the morning of we got hit with freezing rain that turned the roads to ice.  We ended up with 20 players.  Here’s my list:

Round 1 vs Iron Hands I played an interesting list – it had SIX dreads – 4 Ironclad, a Contemptor, and a Venerable.  Some of the dreads are hiding in this pic and one is in the Stormraven at the time.  He also had tac squads to fill out his troops and then a deep striking trio of Captain, Librarian, and Chaplain all in terminator armor.  I hid my predator and scorpius and spread out my other units to avoid him dropping his characters behind my lines.  I put two scout squads in the middle of the board to work on objectives.

T8 on Ironclads is rough since most of my shooting is Strength 7. I think he should have rushed everything at me turn 1 to force me to pick targets, but instead he sent his Storm Raven up and kept everything else back and did not deep strike his characters turn 1.  He had some bad luck turn 1 with his shooting so I ended up relatively intact.  I then shot his storm raven, took care of a couple dreads, and used my Scorpius to start working on his tac squads.  He brought his Bros in turn 2, but a combination of the Leivathan, Quads firing the S8 shot and the Scorpius took care of them.  After that is was just mopping up what he had left and I ended up tabling him, taking over 30 points in round 1.

I had the third highest battle points of the winners, so I’d be on table 2 in the next round.

Round 2 vs. Imperial Guard I did NOT want this matchup.  Round 2 had me going against Beau, one of the local leaders who runs a real tough guard list.  We literally played this game as my final practice match before the tournament.  He won after I conceded on the top of 5 in the practice game, but I had learned some valuable lessons about protecting my units from the alpha strike.  I was so unwilling to be out of position for my stuff in the practice game and take the -1 hit for firing heavy weapons that he had clear shots to most of my stuff and it was an uphill battle after turn 1.  But that was the practice game.  This was the real deal.

Two big differences for this game.  I managed to go first.  And the hammer and anvil deployment hurt him because he plays his tanks aggressively.   It did impact my Leviathan since it only has a 24″ range and I hid him to protect him in case Beau got first turn.  It meant he really didn’t get into the action until turn 3.  Turn 1 I managed to take out and weaken a few tanks thank to the Predator, Scorpius, and my drop pod melta bomb.  I used a scout squad to tie up his demolisher Leman Russ but rolled real short on the charge distance so I couldn’t tie up a second tank.

The game was back and forth the whole time, but it came down to the final turn on two plays.  First, my Captain was sitting on an objective to get me my 2nd objective for the last turn.  He slid two tanks over and shot at him, but the Storm Shield did its job and I saved all the wounds.  Then, he tried to charge my Scorpius that was down to 2 wounds with his Company Commander to try and get this Big Game Hunter point.  I overwatched and managed to kill the Company Commander.  I pulled out a 23-21 point victory.  Real tense (in a good way), tight game of 40k.  I’ve known Beau for years and love playing against him, and it makes it way more fun when you can talk shit and add some flare to your game and know you’re having a good time.

Last round of the tournament I was still sitting 3rd on battle points.  Top table was Eldar vs Eldar, and I was hoping they’d slug it out in a low point affair to try and snatch first.  I was playing against an Imp Soup list that had (off memory):

Guard with Company Commanders, A couple of squads with mortars, and a big conscript blob

Grey Knights with one strike squad, a deep striking special character with a storm shield, and a storm raven

He held back the Jetbikes, Termies, and Contemptors to deep strike using strategems.  This is what it looked like after he dropped in: I’m never a fan of diagonal deployment, but it is what it is.  I used my scouts to provide a block to his deep striking, and it worked pretty well.  You can see he had to drop them in pretty mid table.  His Storm Raven zoomed up to do some alpha striking and to try and force some wounds on the bird rather than his two Custodes units.

He didn’t manage to do very much damage turn 1.  I got real excited because my Predator did 10 wounds to the Storm Raven right away (Even with the -1 to hit), but then he made a ton of saves and I had to basically put my entire back line of shooting into taking the bird down, both for threat reasons and to get the point for killing a unit.  That left his two units free to come after me.

People forget that Craters impact charge movements, so he had to settle for munching my scouts on the left and my quad mortar on the right.  My gunline then lit him up.  The Leviathan got into heavy flamer range and between that and the stormcannons mowed the jet bikes down.  I finished the terminators quickly too.  His captain required some rounds of hand to hand to finish, but that was it.  My ranged artillery then worked on his guard squads while my scouts got into melee with the conscript blob and took care of it.  I tabled him and took nearly max points. So I managed to finish 2nd overall! Ryan’s opponent conceded on table 1 so he got full points.  I’m super happy with the finish, although I kinda wanted to play against the Dark Reaper / Jetbike spam since that is the top list in the meta right now and I wanted to see how I’d fare against it.

I actually won Best Painted and then 2nd went to Beau and 3rd went to David, which was a super nice honor.  And plus I still get the ITC points for 2nd so I’m okay with that :).

Overall I was really happy with how I did.  I am going to tweak my list.  I was not happy with how my Sternguard performed.  Over 200 points and they just didn’t really pull weight.  Against high toughness targets they’re a 4+ to hit (assuming I advance to get into melta range), and then 4+ to wound (against Leman Russes for example.  So statistically I’d get 1 … maybe 2 through? And that’s assuming no invuln save.

So I’m going to play some practice games with a unit of TH/SS Assault Terminators.  That 3++ save is really nice, and the flat three damage from thunder hammers can really impact a lot of different units.  We’ll see how it goes.  My first major event this year is Adepticon, and I have roughly three weeks to get some playtest games in.  If the terminators don’t pan out, that leaves me with roughly 240 points to play with.