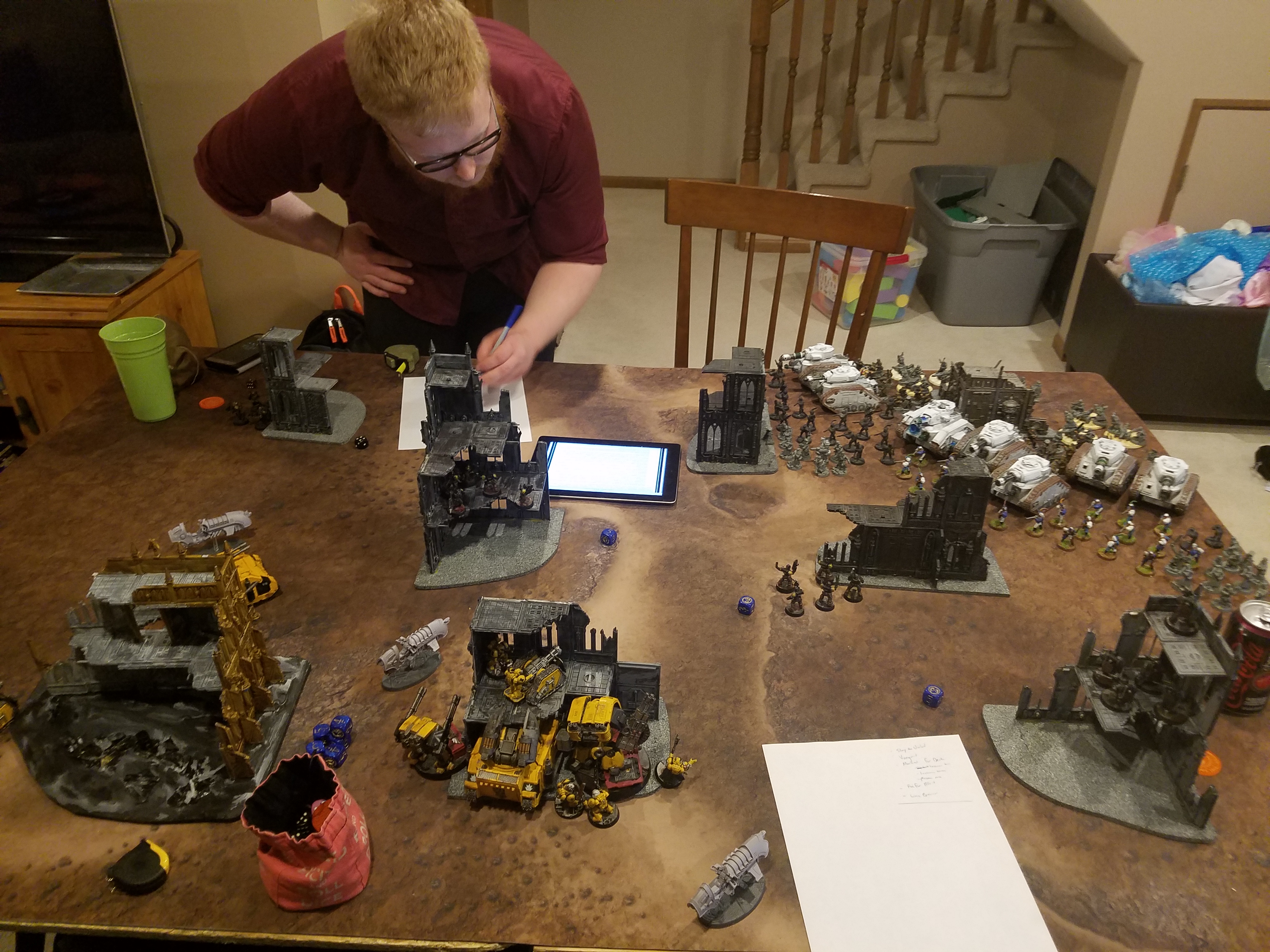 So since the Game Shoppe tournament, I’ve been busily trying to get in as many practice games as I can.  I don’t have much time to play with teaching and going to grad school (oh and kids. Kids take up time too), but my goal was to get in at least 6 more games to try and a) finalize my list and b) practice with it as much as I could.

I was down in Lincoln helping with a high school debate tournament and managed to arrange a game with Kyle.  Kyle knows his stuff and plays tough lists, so this would be a good test.

We played one of the Adepticon prep missions, and made sure to play with true line of sight since the ITC rule about first floor ruins is not in use here.

This game was pretty much over turn one.  He won the dice roll and I seized.  He had his huge blob of Black Knights up at the edge of his deployment zone, so I moved my Leviathan around the wall and let it rip.  Even with the -2 to hit (for moving and for his aura), I deleted the unit with just the Leviathan.  That left me able to pick his Shield Captains apart in a couple of turns and then he called it.

I realized two things from this game – first,  I need to get some practice in going second.  I know what my army can do if it gets to unleash its shooting unmolested.  I need to work on positioning so that I can shield my units but still have them in position to give a good punch back.

Second, I need Shield Captains.  My terminators are great and hit hard but even with deep striking they’re too slow.  I brought them in on the middle of the board and his army was too fast and just went around them.  Shield Captains hit hard and have huge mobility benefits.  They are also a serious enough threat that they would force my opponent to choose – go after the Leviathan or go after the Shield Captains.

I already had a test game lined up the next night, so I would change up the list then.

So I lost the Terminators, a Quad Mortar, and a Rifledread but got three Shield Captains.  I would make them my warlord, and use two relics so two out of three have a 3++ invulnerable save. Alex plays a tough guard list that is pretty common – conscript bubble wrap protecting the heavy guns.  We again played an Adepticon mission (he’s picking his 5 tertiaries in this pic).  You can see the unpainted Shield Captains – they were on my to do list for after Adepticon, but I already have the space marine jet bikes for my Horus Heresy list.  My plan is to use them as “counts as” Shield Captains.

They were a total game changer.  He could take out my backline or my Shield Captains but not both.  In the end, I was able to table him.  So I had settled on my list, but I needed more practice.

For some reason I only took a picture pre-deployment.  But Grant was my round 1 opponent for our new 40k league.  He is playing his Death Korps of Krieg list, and it is definitely not a typical list and definitely tough to play against.  He had some backline artillery – thudd guns and earthsahkers, a Malcador, a Leman Russ, some cav squads, and squads with the mole drills (or whatever they’re called).

Grant seized the initiative, so I had the chance to practice going second.  His riders came down and got into my scouts, and I sent two of my shield captains upfield to deal with the artillery as fast as I could.  It became a race against time – how fast could I kill his artillery before his guns got my backline?

In the end his Mole Drills did SERIOUS work – they mowed through anything I could throw at them and my -1 autocannon shots just could not do enough damage.  But My final shield captain got through his artillery, killed the warlord, and secured enough for a narrow win.  The final score was 36-18 (we use ITC missions for hte league), but it was much closer than the score indicated.  I was in danger of being tabled.  But I have to get used to games like that where it is tight and keep my cool and just maintain target priority. I played Jamie’s Eldar during our regular Friday gaming night.  I had asked to play against a tough Eldar list – and he delivered.  It isn’t the common Ynarri list that has been floating around since LVO, but it packs a punch with Hemlocks and strong psyker spam.  I specifically asked to go second to see how I could do.

In the end I only had one model left on the board.  I actually only lost by a single dice roll – if I had killed his Dire Avenger sitting on my objective I would have controlled the only objective.  But honestly, that’s flattering to me because he moved his whole army up to table me.  If he had parked units on the other two objectives it wouldn’t have been close.

I made a major mistake in deployment.  I deployed my scouts up in my usual “block off deep strikers” mode.  With as many FAST psykers that he has (namely the fighters), he was going to get in my backline and smite vulnerable stuff.  Turn 1 he flew hemlocks up and killed 1 shield captain and seriously wounded another through psykers and the autohits from the fighters.  I needed to bubble wrap my characters with scouts to be mortal wound shields and prevent him from targeting me with that.  I managed to fight back and get him down to one Dire Avenger and three tanks, but I literally had one gunner from a Quad Mortar left.

It was a great learning experience and I’m glad I got the game in.  I haven’t played Eldar yet this edition, and I needed to see them up close and in person. My goal is to get 2 more practice games in before Adepticon.  I like the list, I just need more experience.  We’ll see how it goes!