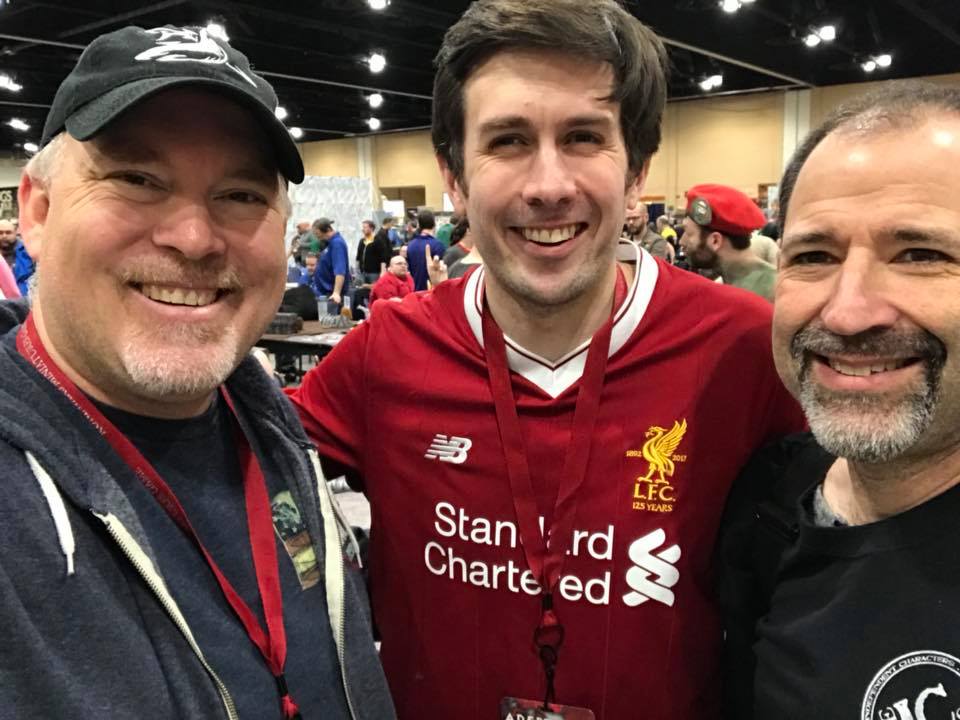 Adepticon has come and gone!  It was a five day whirlwind, but as usual I loved every moment of it.  I drove out with Russ, who is one of our local game gurus, on Wednesday afternoon.  Russ has a ton of 40k but lately has been really involved with Mantic’s Kings of War, so even though we were riding out and staying in the same hotel we rarely saw each other during the Con.  But we both started off by going to the GW studio preview:

It was cool to see some stuff before anyone else!  The new Knight model looks interesting, but the main item were the new Deepkin for Age of Sigmar.  Man those are some gorgeous models – and I’m really tempted to grab some as I start inching closer to being involved in the AoS community again.  I also thought they’d make some really cool Exodites for 40k, but that’s for another day :).

Thursday was the 40k singles tournament.  For a recap here’s my list:

Game 1 I played a real nice, strong player from Canada, Joe, and his Ynarri: He had the pretty standard Ynarri list – cat lady, dark reapers, and deep striking jet bikes and guardian blob.  This game did not go well for me.  He got first turn, but he only really got through my scouts.  I was able to shoot down his fighter, but that was really about it.  Dark Reapers in cover and with their minus to hit modifier meant that my quad mortars and Scorpius just could not get the job done like I needed them to.  I positioned myself *okay* for the Shining Spears drop, but he was able to tie up one crewman in the quad mortar you see in the crater so  I couldn’t get out of combat and tie them up in shooting.  I charged in a Shield Captain and managed to hit and wound with all five attacks.  My Captain was PISSED and managed to put out a total of 12 wounds.  He had the 5++ on the bikes though, and he managed to save ten of them.  That pretty much marked the game right there.  He was able to get into my backline and tie up my guns with the bikes and mop up the rest of my army.  Super cool player, top army, and a heavy round 1 loss.  Those dice certainly hurt but I could have played tighter too. I forgot to take a pic of the battle, so I snagged this at the end.  Death Guard with all the toys – Mortarion, daemon princes, Rotigus, Epidemius, 3 of the bloat drones as well with Nurglings and Pox Walkers for troops.  The objectives were scored at the end of the game, but I wanted to focus my small arms fire on the nurglings and pox walkers since later in the game I didn’t want to have to worry about them and I wanted board control to move my scouts with impunity.

He played real aggressive and got in my face quick, and my librarian got null zone off around his daemon prince and two vehicles and that allowed me to chomp them quickly.  One shield captain went back and played with Epidemius to make sure the tally didn’t become a problem, and the other two took out DPs and vehicles while my shooting took out Mortarion.  Rotigus was the last model standing before I tabled him.  Max point win to me. This game was an absolute disaster for me.  Super cool opponent (another Canadian!) and great list, but I had some bad luck and more importantly made some bad mistakes.  The first challenge I have is that he has me ranged in hammer and anvil.  My Leviathan mows down robots with ease, but he’s got 12″ on me, so it’ll be a minimum 2 turns before I can get to him based on how he deployed (since I move 8″).  The bad luck came in turn one.  His dunecrawler got 2 lascannons through on my leviathan (I even burned a CP to reroll one invuln save), and then he rolled boxcars for wounds.

The critical mistake I made was not fully understanding the strategem that lets the Dragoons come on the board.  I didn’t realize they could move after that.  So I thought I was safe, but I was not.  He came on and got the multi charge off on my Leviathan and regular Dread.  Leviathan overwatch actually took some out, but the the strategem that he gets bonus attacks on 4+ meant my Leviathan was down after turn 1 and most of my gunline was now tied up.

I was doing *okay* – I deep struck a shield captain into his back left corner and managed to take out a dunecrawler with my Predator.  But then I failed all three shield captain charges.  The critical one was the one in the back, it meant he was now exposed to the whole army’s shooting.  I got a shield captain in to the Dragoons and took some damage, and then in the next turn forgot to use 2 CP to interrupt before he finished the captain off.  That mistake sealed the deal and I took a 3-37 loss.

The final game of the day was against Orks.  90+ Stormboyz is no joke.  Backed up with 10 kannons, too.  I was determined to at least finish 2-2 on the day, especially after I had no one to blame but myself for what happened in game 3.

So my strategy was to take out as many kannons as I could turn one so he couldn’t ping my gunline, and then hope that I can turn their full attention to the storm boyz turn 2.  I took out all but 3 kannons turn one (from shooting and getting two shield captain charges off).  His plan – clearly – was to roll down my right flank and then swing through my army.  He managed to get his boyz across the table turn 1, but I only had scouts and a quad mortar over there.  He couldn’t overrun and that let me shoot him with reckless abandon.  30 storm boyz are tough, but not when your Leviathan has 20 rerolling 2+s coming at you.  By turn 4 he called it after he was down to 10 boyz and a handful of grots.

So I finished the day 2-2.  I was disappointed, but I felt I had learned some good lessons.  I also felt that there were still some sub opitmal components of my army that I would need to work on.

So an unexpected changed to my schedule was competing in the team tournament!  My buddy Matt Root ( who won the whole Adepticon singles tournament…) had a fourth drop from their team and needed someone else.  I was happy to join and be a dice monkey.  They already had the list built and the models, so that made life super easy.  We were playing Tyranids (the army Matt used to win the singles tournament), so I was way out of my element.  But man I forgot how much of a blast the team tournament is!

So we basically each had the same list – 2 Flyrants with Monstrous Rending Claws, Ripper Swarms for troops, 1 spore, 1 Tyrannocyte (spelling? The Tyranid drop pod), a Mawloc, and a unit of hive guard.  So with two of our armies on the table that meant we had 4 Flyrants doing work with 2 hive guard zapping (and one of them shooting twice w/ the strategem) and 2 Mawlocs popping up and getting into business and pinging mortal wounds.  It was a brutal list.

We got a strong win game 1 against Catachan/Nid team and then played the GW Design Team (including an author of the Tyranid codex) round 2: We crushed them on both boards.  After the game they talked about Hive Guard and Flyrants.  So if those are nerfed in the FAQ, we’re pretty sure that’s our fault.

Game 3 we played Eldar and took max wins from them.  The next day we played Guard (Chicago Kamikazes, the eventual Best Overall team) and got a 40-0 and a 37-3 out of them.  That set us up for a final showdown with a really tough Ynarri team with four of the best 40k players in the country.  Matt and I got a 40-0 win, but our other two guys had some real bad dice and made a mistake on advancing and they lost 8-32.  So we were in position to take Best General but didn’t get it.  We don’t know where we stand (waiting for full results from Adepticon), but now we’re honestly okay with it because we have the badge of honor that GW delayed the FAQ as a result of Adepticon (and at least partially because of us specifically).  So we’ve been joking that we broke 40k the past few days.

Playing in the team tournament was cool for a number of reasons.  First, the other three that I played with are good.  Really good.  I learned some new things about deployment from them, but I also learned that overall my game sense is not that bad.  I also realized how much better the Nids are than my Space Marines, and it made me realize that I’m really handicapping myself by continuing to play Imperial Fists.  I’m going to try out a couple of other builds, but I’m really thinking about using a different army for Flying Monkey.  We’ll see.

A day after getting back from Adepticon I had to get my 2nd league game in.  I figured this would be time to try out my new list.  I picked up the Rogal Dorn model at Adepticon (and started painting him – he’s between the two Leviathans), so my new list I’m “Ultramarines” to get access to the primarch:

It did really well in its test game.  I’m also writing up another list that is an all infantry battalion of marines (yes, really).  We’ll see how that goes.  If I’m not impressed with either list, I have a whole additional faction planned that I want to try out. We’ll see.

You know Adepticon is a good event when you immediately want to go back and paint and plan out lists.  I have the league going on right now and an RTT coming up in May.  That will give me some live practice sessions before the Flying Monkey GT in June!