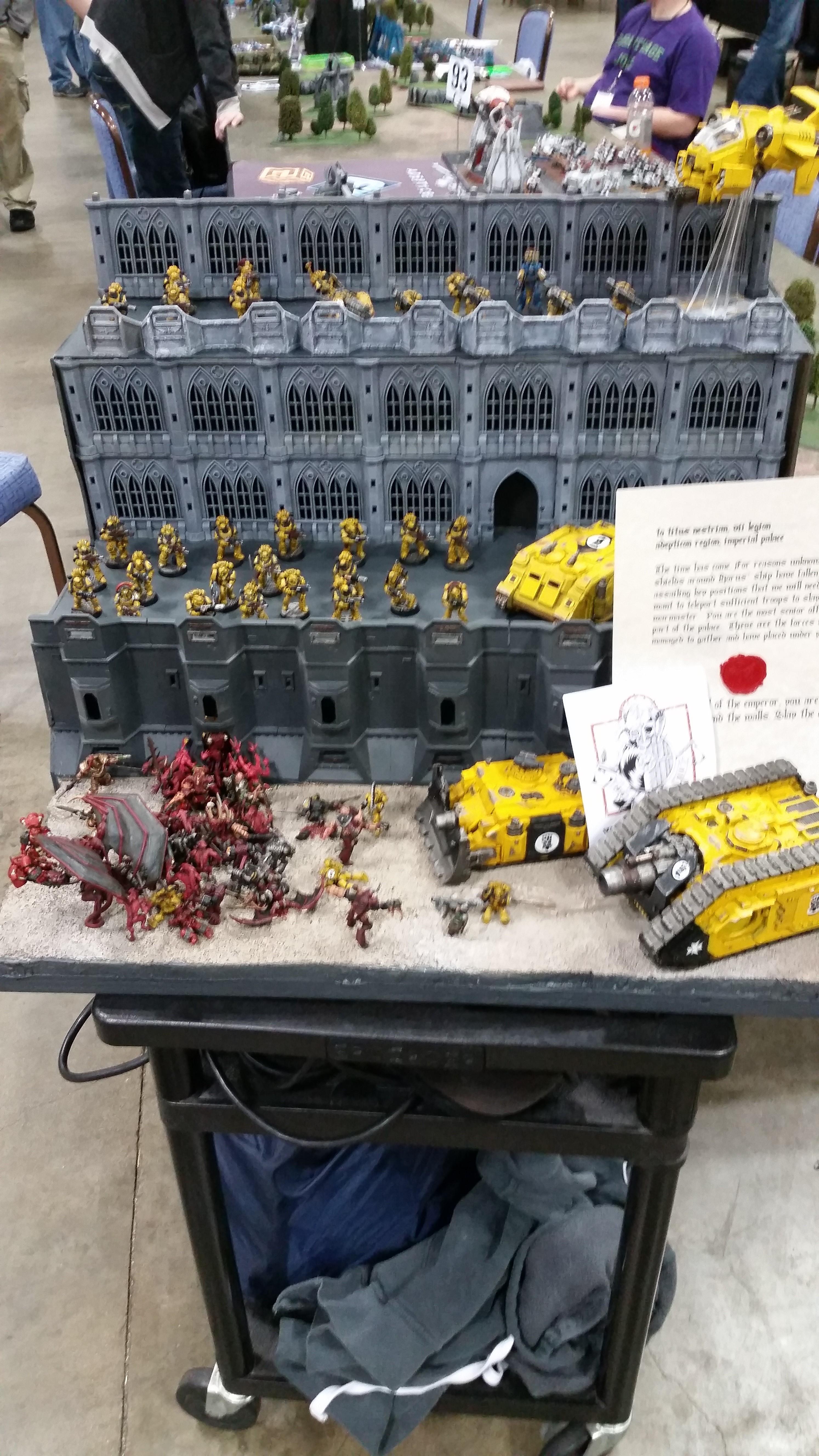 I’m bringing the blog back, and what a better way to kick off than discussing Adepticon 2016!  This was my 5th trip to Adepticon, and was also my shortest.  My usual 40k team tournament members wanted to do other things, and I wanted to make use of the free Saturday/Sunday as well so I was only there on Thursday and Friday to compete in the 40k championships and the 30k tournament.

Like the last two years, I brought my Imperial Fists.  This has been a labor of love for me to slowly grow the legion over the past few years.  This was what I took last year: I took this display board with – the idea was the Imperial Fists were boarding a daemon ship.  I thought the idea was okay, and while the overall approach was good I waited too long to put it together and it didn’t come out as well as I would have liked: So this year, I knew I would take them again.  I wanted to focus on the Siege of Terra, and I wanted them to be defending the walls.  I wanted there to be a narrative element to it, so I wanted opposing forces on the display.  The problem is that when you throw TWO armies on the board it looks confusing and hard to tell what the focus is.  So I decided that I would have my army be up on the walls of the palace and the enemy be below: So you can see the wall and the ground below.  The army will be up on top of the wall.

My thinking was that there would be a hole in the wall and that the traitors would be trying to get in.  And I wanted to model an interior room so you could see them getting in too – here’s a WIP shot with a heavy chainsword sticking out: So I managed to finish the ground floor with the traitors and the interior room, but left a lot for the top area with the army.  I made the choice not to rush it.  I could get the walls painted up to a decent standard and make it look good, but safe the other details (like defense turrets) for later: And the interior room off to the side, including the LEDs that I put in: So with my board done, and my awesome new KR Multicase backpack, I set off to Adepticon with only a few bases left to paint (that’s the least amount of stuff I’ve had to paint at an Adepticon ever.  Last year I had to paint 5 marines and do 12 bases).

I’ll talk more about the event, but here’s a preview of how my board looked and the award I took home!